Mone Florence | 2021
Florence was phenomenal coming off the bench for Team Elite. She immediately contributed causing deflections and grabbing steals in order to create her own offensive possessions. She quickly turned these into fast break opportunities driving against contact and finding her open teammates in order for them to score, too. If she did have to play set defenses, she did an excellent job staying with her opponent or sliding into help positions when her teammates needed her to. In half court offensive situations, she did an excellent job getting her opponent off of her by using fakes and her speed to get by them.

Jayda Low | 2021
If you want someone who knows how to move her body quickly with and without the ball causing problems on both ends of the court, Low is your athlete. She was seemingly uncatchable running the floor knocking the ball out of opponents’ hands and creating fast breaks from that opportunity. She quickly crashed the boards and made cuts on offense showing that she is sneaky with her moves getting by her defenders. Additionally, she had several second chance opportunities with these moves.

Jada Session | 2021
Session recently committed to Furman, and she showed that she certainly belongs there. She was aggressive inside the paint making strong post moves to score. She was persistent going after rebounds as well having her way most of the time. Her size and length helped her jump into passing lanes causing problems for her opponents on defense.

Cierra Foster | 2021
Foster continues to increase her stock displaying her arsenal of moves that she can use to score a basket. She has a nice Euro step, hesitation move, fakes, and more that she uses to separate herself from her opponents. She has amazing vision of the court, too, knowing the importance of timing to make her moves or to find her open teammate to help them make contributions. On defense, she is very active constantly moving around the court with her feet and hands causing problems for her opponents to get by her.

Tairah Galvan | 2021
Galvan was dominant on defense over the weekend. She could pick the pockets of her opponents grabbing the ball right out from under players trying to dribble or right out of their hands when trying to hold the ball. She showed her high IQ positioning herself well helping her teammates on defense and always being prepared to make a play on the ball. These steals quickly turned into fast break opportunities for her.

Kaleigh Addie | 2022
Addie is a very effective point guard who handles the ball at high speeds. She is constantly pushing the ball up the court and knew exactly where to go with the ball in order for her team to score some more points and pull away with the lead. She also has a nice shot being able to shoot from all over the court, especially from behind the arc. On defense, she was causing problems jumping into passing lanes ending the possessions for her opponents.

Dayuna Colvin | 2022
Another tough defender was Colvin constantly jumping into passing lanes grabbing steals. She would seem to fly across the court in order to make a play on the ball. She had a great ability to score from all over on offense including some nice shots from behind the arc.

Raven Thompson | 2022
Showing some true strength in the paint, Thompson had her way when handling the ball with her post moves. She did well adjusting her body and feet in order for her to find the best way to score. She was aggressive when grabbing rebounds, and she made sure to help her teammates on fast breaks by being the first one back on defense showing off some nice blocks or being there to rebound in case her teammate missed the transition points.

Jaci Bolden | 2022
Opponents seemed to have trouble keeping the ball out of Bolden’s hands because she was constantly causing problems for them grabbing steals and pushing the ball up the court on fast breaks. She did an excellent job separating herself from opponents using fakes or just quick speed in order to show off her shot. When driving down the middle of the lane, she showed no fear when going up against tough contact.

Kaylynn Kirklen | 2022
Kirklen showed that she is a player always ready to make a contribution as soon as she steps on the court. She quickly made some nice points for her team when coming in the game right when her team needed it to gain the lead. When she didn’t have the ball, she was constantly making smart cuts into the defensive gaps finding ways to contribute for her team.

Nala Reeves | 2022
Reeves consistently showed off her vision of the court getting her teammates involved and making smart passes that seemed to thread the needle. She did well scoring on her own, too, showing off her deep range. On defense, she did well crashing the boards to grab rebounds in order to obtain possession again for her team.

Gabby Hudson | 2022
Hudson was an excellent ball handler who could push the ball up the court with ease and speed. Her speed could be seen on defense, too, by the way she would seemingly fly into passing lanes grabbing steals and taking it the other direction. She could also strip the ball right out of opponents’ hands. She is certainly an asset on both ends of the court.

Sydni Arnold | 2022
Arnold was a tough competitor running the floor well. She was present during fast breaks ready to get the pass from her teammates. She protected the possession and consistently found ways to contribute on offense. She hustled back on defense making it difficult for her opponents to score against her.

Chloe Woolfolk | 2022
Woolfolk’s IQ was on display over the weekend showing her patience when letting her teammates get to the right places in order for them to make the best contributions. She could also score the points herself by moving well with the ball, separating herself from her defender, and showing off her jump shot. She wasn’t scared to drive down the lane either.

Jayla Cook | 2022
A player who was fun to watch because she was having a lot of fun was Cook. She was constantly moving and wreaked havoc on her opponents while pressing full court. It seemed like the guards could not get past the half court boundary with her aggressive defense. She continued to move well on offense finding the gaps in the opposing defenses to put up her shots.

Jaci Bolden | 2022
A player who truly hustled after loose balls and got after opposing offenses was Bolden. She created steals over and over again by jumping into passing lanes, jumping in front of opponents trying to make a pass, or picking the pocket of guards trying to get by her. After creating the possession herself, she had some nice moves with the ball blowing by her opponents or using fakes to get by them.

Jayda Brown | 2023
Brown is someone who knows how to score from anywhere on the court. She was driving to the basket fighting through contact. She had a nice midrange jump shot, and she showed off her deep range hitting shots from behind the arc. Her ball handling was fantastic as well because she used some of those nice moves to create separation between her and her defender.

Monet Dance | 2023
An athlete with fantastic ball handling skills was Dance. If teams tried to put pressure on her, she seemed to thrive as if she was ready to show off how she can handle the ball through anything that was thrown at her. She made some very difficult passes into her teammates that seemed to thread the needle between the hands of her opponents. She also moved well without the ball crashing the boards going after rebounds trying to continue the possession for her team or begin a new one.

Hannah Miller | 2023
Miller was a threat no matter where she was on the court. She could drive the ball fighting against contact. We saw this a lot on fast breaks over the weekend because she was constantly grabbing steals from the other team. She was aggressive going after rebounds, too, and she had several second chance opportunities that she used to score.

Kyndall Sessom | 2023
Sessom was a very unselfish player, and you could tell by the way she was always looking around for her teammates when she was handling the ball. That does not mean she was scared to take the ball to the hoop herself, and her opponents quickly learned that fear of contact did not deter her from getting to the basket. She had several old fashioned three point plays.

Linsey Myles | 2024
Myles’ basketball IQ proves that she is already prepared to make contributions as a young athlete for her high school team. She had an arsenal of post moves including a nice spin move to score or a perfect up and under move that gave her another two points. She already has some great strength that she can use to grab rebounds for her team, and she can handle the ball well moving it up the court herself after she gets a defensive board.

Zayjah Knight | 2024
Knight used her speed and athleticism to be present for most of the fast break opportunities her team had. She created the steal and pushed the ball up the court herself, or she was there ready to receive the pass in order for her to score. She did well driving against contact.

Camille Files | 2025
Files seemed to have the composure of a much older athlete while handling the ball for her team. She controlled the tempo of the game pushing the ball up the court or slowing it down and setting up offenses on that end of the court. When she didn’t have the ball, she was making some nice backdoor cuts losing her opponent in the process. On defense, she was constantly grabbing steals and pushing them up the court to get her own points in transition or pass to one of her teammates to score.

Janiya McCoy | 2025
McCoy was another great ball handler for Team Elite. She did a great job controlling the tempo of the game for her team. On defense, she was aggressive going after the ball getting it loose from opponents’ hands or grabbing it in the air when the other team was trying to pass the ball. These steals were quickly turned into fast break opportunities using speed to blow by her opponents.

Alana Wells | 2026
Wells certainly has the length that she can use even at such a young age. She was jumping into passing lanes and grabbing rebounds no matter where she was on the court. She could handle the ball well getting opponents away from her in order for her to show off her shot or move towards the basket. She showed great vision of the court looking to pass to her teammates, too. 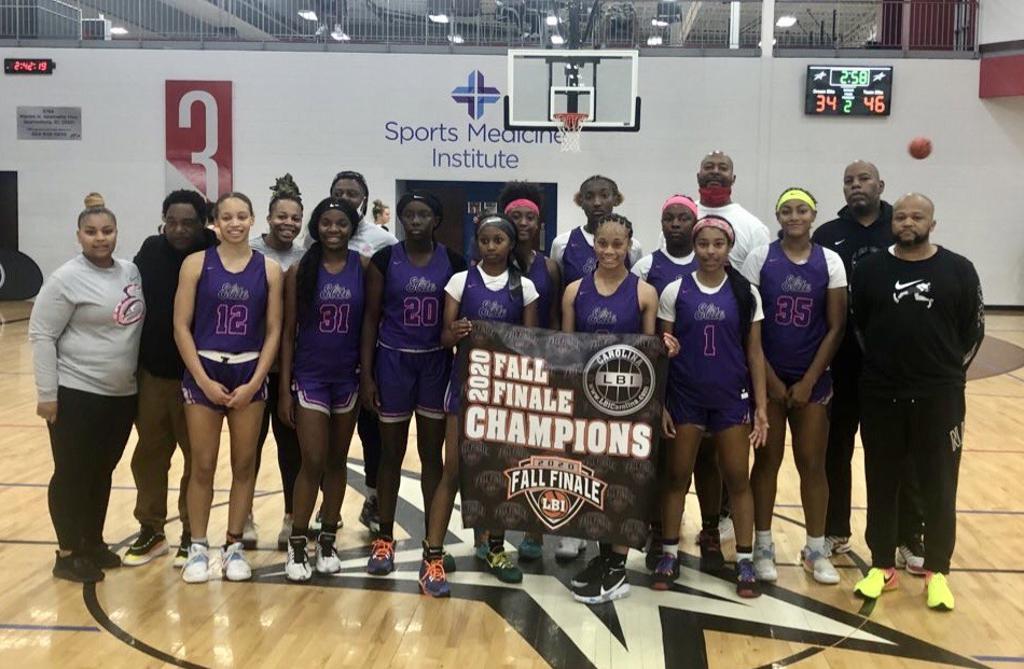